History Renewed By Those Who Were There! 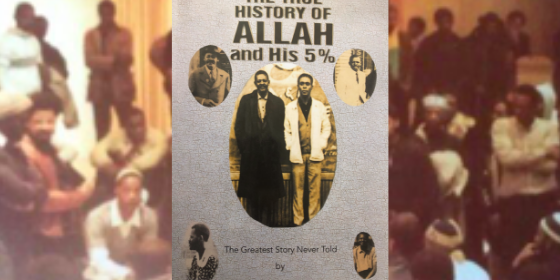 To those Five Percenters who where there, Peace and thank you! In some cultures, one person is chosen to continue the storytelling tradition. But in the unique Five Percent culture, the stories come from those who were there and are just and true. Like other cultures, our culture is rich with lessons, symbolism, and meaning. Similar to other cultures, our oral traditions play a large part in community and family life. With this book, our oral tradition is manifest by enlightened griots in written form.

For instance, when many began the knowledge of Self journey and did their first fast, they were given a righteous name. Your name could be something historical, about a story, or a place, but in order to show and prove you are responsible enough to have this name, you have to know the meaning of your name, Allah and his Five Percenters, and be able to pass this knowledge along to future generations. This begins the tradition of storytelling within each person. As a collective work, we now have The True History of Allah & His 5%: The Greatest Story Never Told by Those Who Were There.

The moment we have all been waiting for is here and now. The history and narrative of the Gods and Earths who were present in the 1960s with Allah are revealed for the world. Of all the books that have been previously written about Allah and his Five Percent Nation of Gods and Earths, this one is the most authoritative because it was written by those who were there as pointedly stated by the books’ title.

For years, readers have sought out an authoritative history about this nation and have been led in the wrong direction by questionable narratives, unwarranted assumptions, and unreliable sources. Amazingly, in 2019, people can still be found asking novel questions about our history. Thankfully, inquiring minds who want to know have a plethora of writings from official and sincere Gods and Earths who are responsible for an outgrowth of literary works.

None of this is arbitrary. In fact, it can be said that this is mathematical. This is all a sign of cultural development happening now during a time of elevation. It is more evident than ever before, when you read this book, that we have made and are continuing to make (write) history alive. This book helps to bring the generations together, to have a dialogue about what these teachings are truly about, and to help those who read it to unlock their infinite potential.

Additionally, this book helps to destroy (or break down) stereotypes and myths that many held in misunderstanding. This is an outward projection of the collective-self into the arts for the development of both generations (elder and younger) to revisit and explore ideas that may be taboo or difficult. Fortunately, Allah taught his Five Percenters to teach these ideas so simple and plain that a baby can understand them.

The lessons, history, and symbolism this book embodies show us that Allah is in each one of us as well as our children. He is not dead. He lives on through us. Most notably, these stories are evidence of the past that have been passed on to the future. With the collective knowledge of those who were there, we can introspectively delve further into our own infinite mind and discover the righteous way.

To order a copy of The True History of Allah and His 5%, visit the CommonUnity Center at Allah School in Mecca, or visit Xlibris Publishing, email: orders@xlibris.com, or call: 1-888-795-4274.