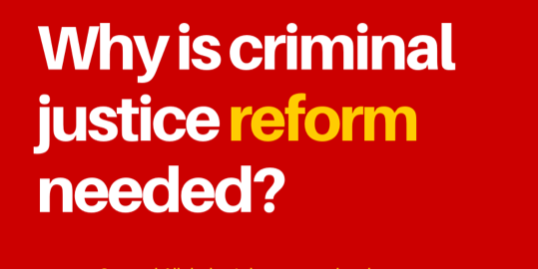 Reforming the criminal justice system requires a sustained effort to reform people’s hearts and minds about justice. Shouldn’t justice include what happens after punishment? What about those who are wrongfully arrested and convicted?

With all that is invested in punishment, shouldn’t there also be an investment to meet the needs of victims and offenders after punishment?What good is justice if the society from which the offender was a part of never learns the vital lesson?

If we can imagine a large portion of our society who live behind a veil of ignorance of existing laws and policies, it is our duty as a society to seek justice when the veil is lifted. If we dare to look at the truth, we will find staggering numbers.

For example, corrections (which includes prisons, jails, probation and parole costs over $80 billion to maintain but this does not include the cost of the legal process and what families spend to support incarcerated loved ones. When combined, it costs over $182 billion to maintain mass incarceration. Criminal justice is good business for some, but the focus on profits off punishment prevents justice from being fulfilled.

Despite a national decline in crime, incarceration rose 500% in the last forty years. Out of 2.3 million incarcerated people in the United States, about 1.3 million people are in state prisons. The rest are spread out in federal prisons, youth correctional facilities, immigration detention camps, and county jails. Careers in politics and law have blossomed over the creation of a permanent underclass of society that is costing American taxpayers billions.

According to the Bureau of Justice Statistics, there are over 4.5 million people under community supervision (probation and parole). That’s over 4.5 million families impacted by the present criminal justice system. Without adequate resources allocated to meet the post-conviction needs of individuals and families, policymakers miss the salient points of justice which have far-reaching implications beyond punishment.

Whether we believe people are born criminals or socialized to become so, the fact remains that – at any time – anyone can cross the line and become a “criminal.” Society – by and large – looks to the system itself to address the factors that underpin crime. The paradox of crime and punishment as well as probation, parole and recidivism – all face today’s law and justice students, practitioners and the general public. Society itself must help prevent crime by supporting programs that reduce recidivism and improve outcomes for people returning to society. This is why I stepped up to support the REFORM Alliance.

Remember that veil of ignorance mentioned earlier? Society needs to be informed about why the system is broken and what’s needed to reform it. Justice is not yet done unless the system corrects the social wrongs committed by draconian and restrictive laws. This is an ongoing duty of the policymakers who helped to perpetuate the existing system. Once the veil is lifted, those in society must teach to help prevent crime. Justice is done when a wrong is made right by the individual and all those impacted by it.

Justice, in a broad sense, is about fixing that which broken. All the prophets have tried to reform the society’s which they were a part of. It’s up to us in the home of the free to help facilitate liberty and justice for all. If we are to have any system at all, it must be a system that is just, fair and righteous from punishment to redemption. The FIRST STEP ACT and the Second Chance Act are significant steps forward, but reform needs a sustained effort on a state and federal level that goes beyond punishment.