Street Knowledge and the Citizen App 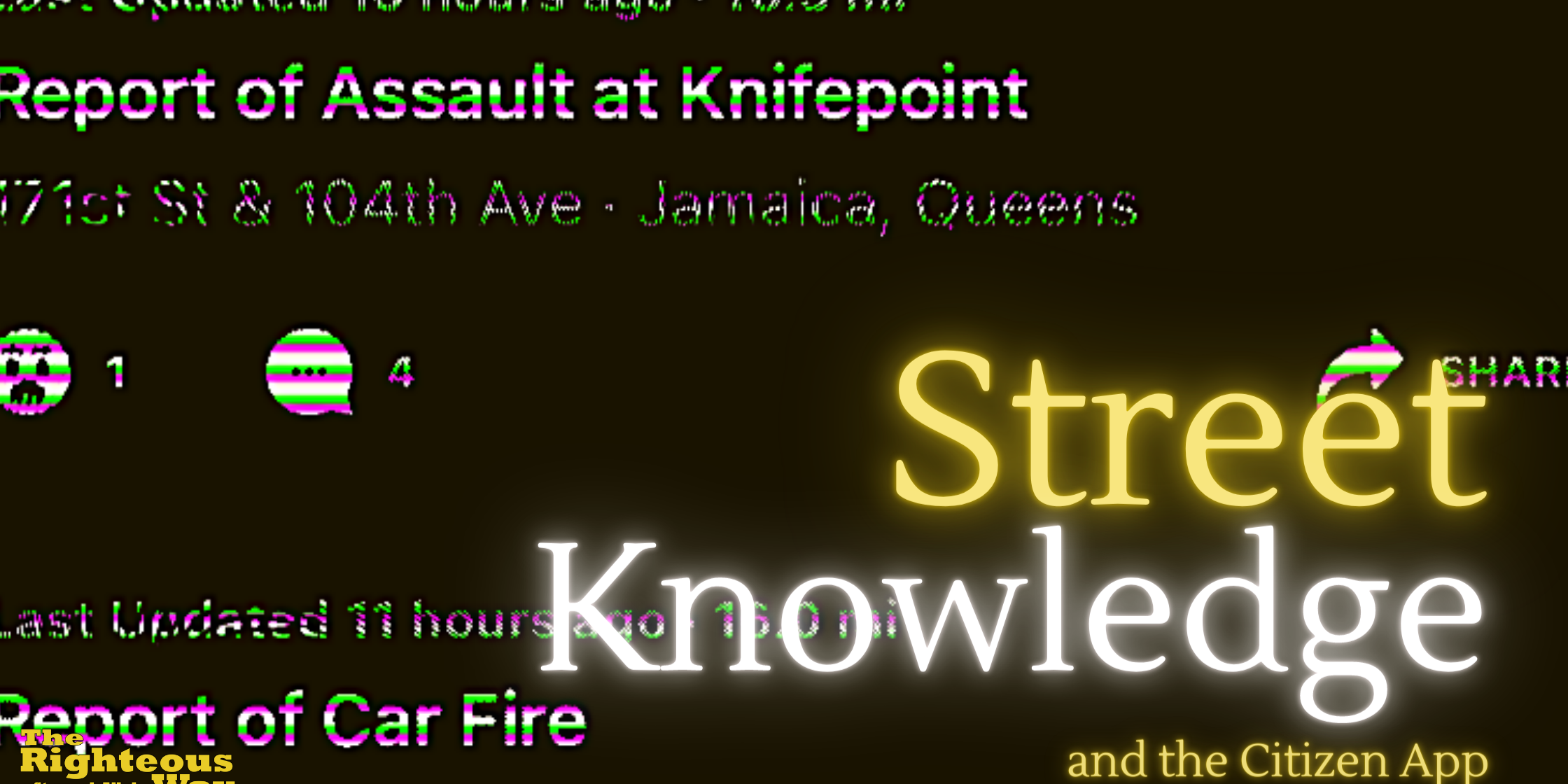 In June 2019, Bloomberg reported that around one million people downloaded the Citizen app in New York City and that the app ranked in the top ten news apps in the App Store. If you want to know what goes down in the streets of New York City, this is the app to have. In any New York-minute, you can see what’s going on outside. But this isn’t the true knowledge in the streets.

In real-time, the Citizen app sends users location-based safety alerts. It allows users to read updates about ongoing reports, and it even allows you to post videos and leave comments (hmm). The app is currently available for iPhone and Android phones, and is available in many cities, including but not limited to, New York City, Chicago, Los Angeles, Philadelphia, Cincinnati, Cleveland, Baltimore, and the San Francisco Bay Area (hmm).

So how does it work?

The Citizen app uses radio antennas installed in major cities to monitor 911 communications. New York City has about 10,000 911 calls each day. Citizen opens up these 911 calls and sends them to the Citizen app which gives users real-time crime and other incident alerts like fires, or a naked man running down 1st Avenue who just got out from Bellevue Hospital…

Anyway, users have the option to live-stream that naked man begging the guy on the corner of 1st Ave and E 26th Street for a hot dog. Live-streaming allows for complete community engagement and transparency. The Citizen app gets a thumbs up because it raises user’s awareness about what’s going down around them so they can stay alert and safe.

If you happen to be in another town and you plan on traveling to someone’s hood, you can check the Citizen app to make sure it’s okay for you to travel to say…Brownsville, Southside Queens, or Staten Island. Just saying, you can see reported fights, shootings, murders, robberies, and domestic disputes. In other words, you can see all sorts of savagery and bravery at any given moment.

What’s this to a Five Percenter?

Five Percenters are arguably the most notable and influential street teachers because of their unique teaching style. Some street youth from the 1960s to the 1990s left street life and embraced the knowledge of self because it was cooler, wavier than being in a gang. The knowledge of self offered two obvious things that being in the streets coudln’t – growth and development. In 1967, the Urban League – at the behest of the Lindsay Administration – transformed one of its Harlem locations into a Street Academy for Allah’s Five Percenters. Today, that Street Academy is now called Allah School in Mecca which is an outreach center for the growth and development of the youth.

Aside from a fire or accident, some of the savagery on the Citizen app wouldn’t happen if some folks listened to a Five Percenter. One of the visions of Allah was to stop crime. Can you just imagine that for a second? He gave young people from the streets the knowledge of himself and themselves.

Can you also imagine that some people did not want him teaching young people the knowledge of self? And the average person, on any given day or night, who might do something that would likely be on the Citizen app, doesn’t have knowledge of self. But if they had it and applied it righteously, they would not have likely been in that position.

What about that street knowledge?

These days, if you’re not right and exact as Five Percenters teach, you can likely go to jail. This was true back in the day, and it is certainly true today. Allah’s Five Percenters spread his teachings to their peers and saved many from going in the wrong direction in the streets. Some, however, had to save their selves. Others had to clean their selves up after living a street life. But for some, it was too late.

Oh, and you can read blogs written by Five Percenters, too. PEACE.

For more on street knowledge, you can order The Righteous Way: Infinity Edition (Part 3) here.