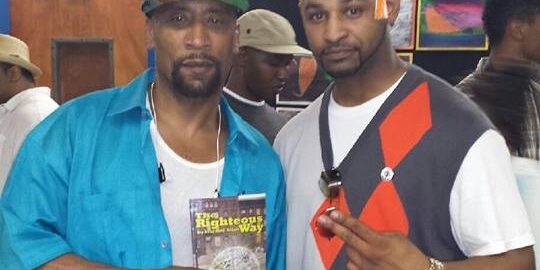 LJ: A lot of Internet Gods are out here now. Shit, I can join a group on one of these websites and they’ll send me some lessons for joining.

SA: You were telling me the day we were in the studio about that incident. The person didn’t even know who you were.

LJ: They didn’t know who I was at all. I joined some group on yahoo and they sent me some lessons. It wasn’t a full set of 120, but it was a nice amount in there. It definitely was shady. That’s not how we do things; that’s not how we administer our lessons. So, that being said we have to be better teachers and make sure that we use our teaching methods properly. Yes, we teach knowledge, wisdom & understanding to all human families on the planet earth; we can even teach mankind as well. Again, we have to study from 35-50 years.

SA: That’s peace. I just wanted to go back a little too Hip Hop per se. Could you tell us little bit about your first experience with Hip Hop? And who were some of the brothers that influenced you? I know that you have been through this question quite a few times already. But for the purposes of this book God, I just wanted to go into the God’s influence on Hip Hop.

LJ: Well, for me I guess the early Gods would be Rahiem from the Furious Five; he was the first God, but I didn’t know he was the God at that time. At the same time, he had that magnetic. You know Rahiem, I just like his name, his name was attractive, and he had a smooth style. The ones that really attracted me to this was the Supreme Team on a Hip Hop level. It wasn’t until later that I found out that they were teaching and would teach you. They’re the ones that sparked the fire in me and planted the seed in me in order to do the same thing. I felt like what they did was genius. I just loved them on a Hip Hop level as DJ’s, MC’s and the creativity they had when they were making their own original songs. So, when they sang ‘The Enlightener,’ I didn’t know what that was. I just thought it was a song they made up and I thought it was catchy. I knew all the words; I had no idea what they were talking about. Even when they were on their talking about “Peace to the Gods,” I didn’t really know what they were talking about. I was very young at the time. So later when I finally met somebody who was God, my enlightener True King Allah from the Desert; when he started giving me lessons, I’m like wait a minute, I know this. This is very familiar. I had already read Message to the Blackman and stuff, but when I started seeing the math and all that, that’s when the light bulb went on. I said “Ohh, that’s what they were talking about!” I was like “Wow, that’s crazy!” They actually made it easier for me to memorize my math, you know, because I already knew it. Without even knowing it I knew it. I was already into Hip Hop and then once you get knowledge you get that fire when you’re a newborn and you just want to teach everybody. So, I was like “Man, I need to do what the Supreme Team did; I need to put this science in the rhymes in some kind of way.” Back at that time it was kind sticky whether that was ok to do it or not. People kind of felt a way about exposing this knowledge. But I use to say little things back in the day, but I didn’t really go hard like putting the lessons’ lessons into it until later when we got the record deal. Then, it felt like it was time. A lot of people had said little things, but I said we can go deeper. I love Rakim, I love PRT (Poor Righteous Teachers), I love King Sun, I love Just-Ice, but I was like “Yo, we can go deeper”, you know what I mean.

LJ: We was touching the surface very lightly and that’s when we made the decision to incorporate these lessons in a way. Not to be exactly the lessons, but we are going to incorporate more things from the lessons that are familiar to the Gods.

SA: And it worked! Just imagine your verse on “All for One.”

SA: Word! That was definitely peace. Where did you see the pivotal aspect in Hip Hop when the Gods brought it to Hip Hop? If you were to put a year on it, what year would that be? When the Gods made that tremendous leap and took it to another level?

LJ: That’s probably around ’86 (Build Equality). You know, “no tricks in ’86, it’s time to build.” Once Rakim came that’s when the Gods were strong. Then Kane came after that and he was with the Gods too, but in a different street king of way. Rakim was street, but like Kane was just that…Brooklyn (chuckles)

SA: Yea, he was raw (chuckles)

LJ: Exactly, he was raw. Yea, that’s it around there ’86-’87. That was a very strong time for us. And it started from there and lasted a good ten years, up until the mid-90’s with Wu Tang. After Wu-Tang is when it started to fade out a little something.

SA: Right. Now at that point what do you think happened, God?

LJ: Of course, we know there was a concentrated effort to change the messages in Hip Hop when it came to something positive. That can be charged with the introduction and popularity of N.W.A. Once that gangster rap and all that stuff started coming into play, those gangster movies that they put out – Boys in the Hood, Menace to Society, all those types of things right there. They just want to make money at first (the record companies) and they didn’t care what you were saying at that time. That’s why people like us and Public Enemy, Poor Righteous Teachers, all those types of people, even Paris over in the west coast. Those people were able to say certain things; we were able to say certain things because the devils just were greedy, they didn’t care about the content nor do I think they really understood what we were saying to the fullest. They just wanted to be in the game. They just wanted to get money. So, once they started getting money and comfortable in that space, they started to see. Now they starting to here though, what we are saying about them. Then afterwards it’s “Aw fuck it, I’m just going to brush that off.” But once they saw that they can make money with that exact opposite message and even make MORE money without having to hear what they feel is negative because it’s towards them; they started to just promote that. Just to fund and support these things and blow these things up; use the machine to make those things work and draw the machine back when it’s time for the positive stuff to come out. They then instill self- doubt on those positive artists, “Oh what’s wrong with me? How come my stuff is not selling?” Because they didn’t want it to sell, even when it was selling. When our album came out everybody had that album. They still tried to tell us our album didn’t go gold. But when you are controlling the computer program that tells you what the number are, of course I can put something in there for artist and stop it at a certain number. Do you think we are really stupid?!? They do think we are stupid, that’ the thing. Once they realized they could make money with a negative (what’s negative to us) with a detrimental message, that phased us out.

SA: We see the decline in substance in lyrics today. What are your views on that? What can we as listeners, as fans do to create some king of revolution to say we want the content of the 80’s when the Gods were there to come back? What can we do as fans and listeners to help bring that back in a new way?

LJ: Well, the answer to both questions is the same. It goes to EDUCATION! You can’t bring content it you have no content. You see, if you’re not studying anything or reading anything, how are you going to tell anybody anything. As the consumer, if you’re not studying or reading anything, how are you going to demand content that is commensurate of your knowledge of your or the level that you’re at. If we’re all at a lower level consciously and we just accept strip club music, drug music and shoot ‘em up music, then that’s what we’re going to have If the people educate themselves, they’re not gonna want to hear that type of music. They’re going to demand to hear something that coincides with what they’ve been studying. So, it’s in the devils’ best interest to keep everybody apart from their social equality; everybody with the lack of the knowledge of themselves in order to perpetuate this, to keep this going. So, education on both sides, the artist and the consumer are key. I’m not saying there’s one type of education. I don’t need everybody necessarily to be within the 5% Nation, Nation of Gods and Earths. Whatever education is good for you that helps the advancement of our people that have been oppressed; has had the knowledge stolen from us; melanated people around this planet earth. That’s what I’m riding with. I love my nation, but I don’t expect us all to fall within this nation. There are many different ciphers (an infinite amount of ciphers) and we have to not be scared to come together with some of these ciphers and work together in harmony in order to come together with what we have in common.

SA: That’s peace, God. I think you pretty much just summoned it all up in that answer, God.

LJ: I appreciate it!

SA: Word is Bond! That’s it right there. So, with that Almighty, I want to thank you. It was definitely real. Peace God!

Read Part One of Hip-Hop’s Five Percent: An Interview With Lord Jamar