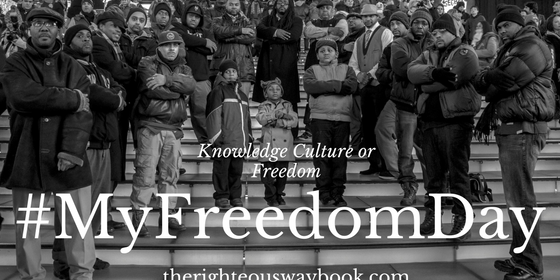 March 14th marks #MyFreedomDay, a student-centered worldwide event – sponsored by CNN – which raises awareness about the global problem of modern slavery. Freedom is one of three major values within the Five Percent (Gods & Earths) culture. The other two are justice and equality. Additionally, the date of the 14th marks Knowledge Culture or Freedom including the 14th letter of the alphabet which is the letter (N) and stands for ‘Now’ or ‘Nation’ within the teachings of the Five Percent. It follows then, that something be added about modern slavery and the multi-faceted fight against it happening now in and outside of the nation.

In 2014, law enforcement agencies arrested an estimated 1 million people under 18 years of age in the U.S. The Prison Policy Initiative reported the U.S. has roughly 2.4 million people locked up, with most of those (1.36 million) in state prisons. Although these numbers fluctuate every year, they provide a snapshot of the criminal justice system and who mostly fills up prison poulations. There are many organizations working to address these issues in 2017. For example, we salute those who are involved in the #CLOSErikers campaign, led by JustLeadershipUSA, in partnership with the Katal Center for Health, Equity, and Justice. They are on the front lines striving to get over political barriers to repairing broken communities in New York City. We are with you!